About three months ago I got a bloody awful cold. Over the following weeks this was followed by a cough, then a sinus infection, then a chest infection. The chest infection then apparently triggered some kind of latent propensity for asthma that I didn't know that I had. Fundamentally I've just spent a lot of the last three months coughing, wheezing and feeling like I've been hit by a truck, leaving me with the attention span of a labrador and all the energy of a damp flannel.

A couple of weeks ago I went to the GP and mentioned that I was still exhausted, still coughing a lot, and still struggling to catch my breath. He got me to blow into one of these things: 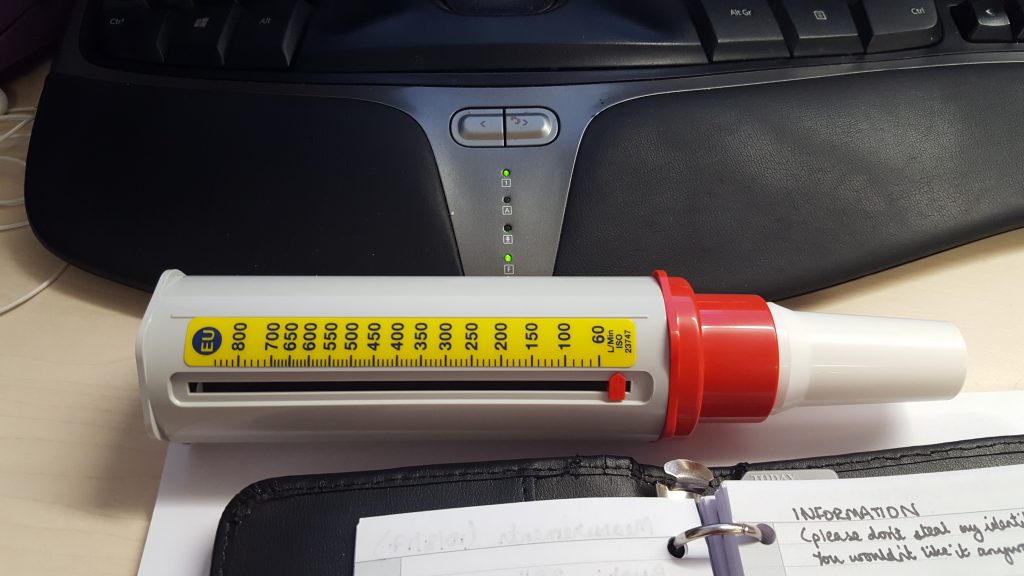 This neat little thing measures how quickly you can blow out air. It's called a "peak flow meter". I managed 230 L/min, which is around half the ideal peak flow for a woman my height and age.

As an aside, my first reaction on seeing this was to feel surprisingly offended - I hadn't realised just how much pride I took in my lung capacity, which is probably an attitude I picked up in wind orchestras over the years... However it was reassuring that I really did have some trouble with my lungs, and I wasn't just being an enormous wuss, even though being a wuss is usually a core part of my personality.

He gave me a peak flow meter of my very own and asked me to take a note of the recordings for a couple of weeks, and start taking a steroid inhaler after a couple of days.

This almost made the whole asthma thing worth it (as a computational biologist, data is a precious commodity). So merrily I began to record my readings and put them together.

The peak flow is on the Y axis, and the X axis is the date and time (each tick mark is the beginning of the day in question). The error bars are the standard error of mean for five readings at a time. As you can see, the readings are way above the 230 L/min I managed in the GP's office. I'm assuming that was a particularly bad afternoon because I'd been walking in the cold air. A healthy woman my size and age should have a reading somewhere in the range of 440-485 L/min, which I've been getting to on some evenings (yay!).

Looking at this graph I can see... a whole lot of nothing. This is chaos. What information could I get out of this?

The morning readings are usually much lower than the evening readings, so that seems pretty cut and dried. I've put a little star over the days where the difference was statistically significant (p < 0.05, because as we know, 0.05 is a magic number).

The GP gave me two inhalers: one brown steroid "preventer" inhaler, which stops the lungs from getting inflamed, and one blue ventolin "reliever" inhaler, which stops the airways from spasming. Another classic sign of asthma is the readings improving after taking the blue ventolin inhaler. The data that's needed to work this out is a reading right before taking the ventolin, and one reading a sensible amount of time afterwards (half an hour seems about right). I only really gave this any thought today, so I'll have to collect more data in order to make any inferences. I know that my lungs subjectively feel a lot easier after taking ventolin.

These facts taken together make it sound pretty conclusively like asthma. It feels good to have a fairly definite diagnosis, because at least we know how to go about treating it.

The readings seem to generally be improving over time but there's so much variation that it's difficult to see a strong trend. The readings don't quite match up with how I've been feeling, either. Since Monday 16th I've been particularly wheezy and exhausted and on Wednesday 18th I honestly thought I might be dying, but the results don't make a noticeable downward swing. That said, I always do feel better in the evenings than in the morning, so that matches. I'm assuming I felt so much worse on Monday because of that big ol' dust cloud, because I can't think of another trigger.

I took two puffs from the blue inhaler at once one day last week and WOW was that horrible. Ventolin, it turns out, acts much like adrenaline in the body, leading to a racing heart and hands so shaky I couldn't even hold a restorative cup of tea. I briefly considered taking a beta-blocker to combat the side-effects but I feel as though taking a drug and then immediately taking the opposite drug is probably a bad idea? A little like swallowing a spider to catch a fly. Anyway, I won't be doing that again.

So in conclusion, my Asthma Wisdom is:

Asthmatic pals, do comment below with any of your top tips.

I've made a few posts about my Bullet Journal in the last few weeks: 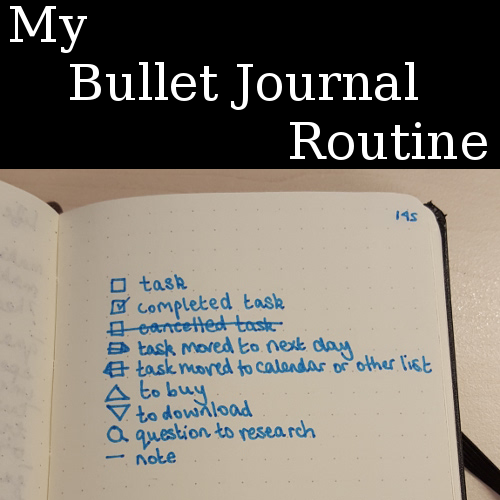 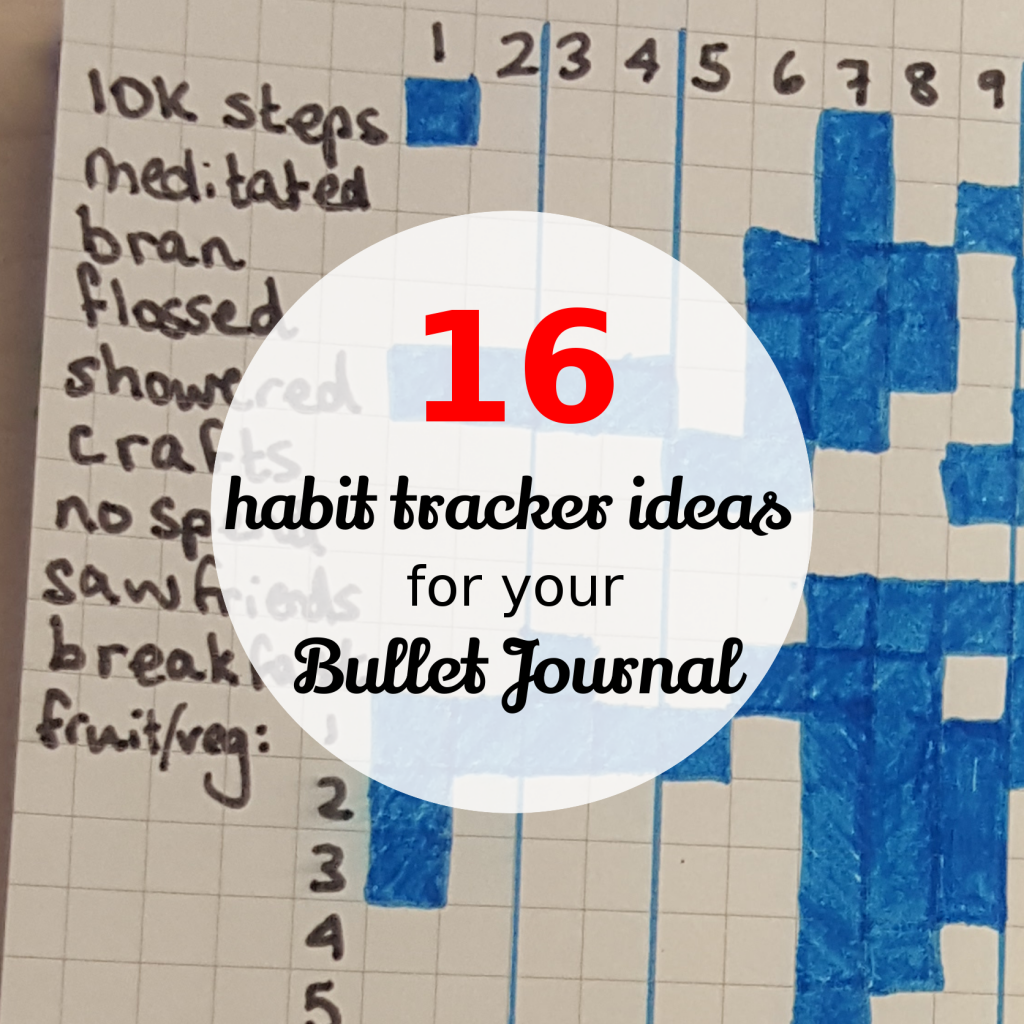 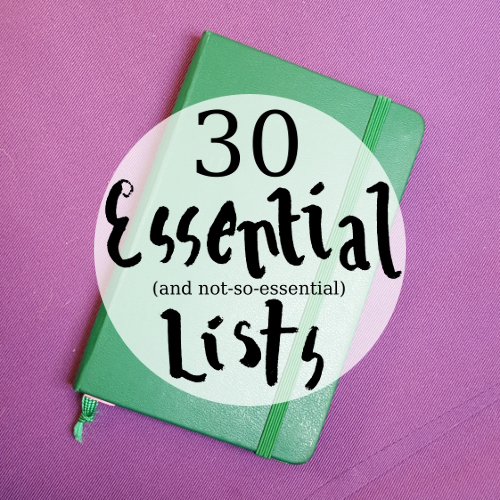 I've also been taking part in the #planwithmechallenge on Instagram, which has been fascinating. The idea is: there are daily prompts that you respond to, and post pictures of your planner pages, and you can use the hashtag to look at other people's planner pages. Here are the list of prompts for November 2016:

A photo posted by #PlanWithMeChallenge (@planwithmechallenge) on Oct 26, 2016 at 6:17am PDT

For those of you who like to be prepared, the December challenge prompts are out, too!

I thought I'd share some of the gorgeous and useful planner pages I've seen in my travels. Check out this cute, dotty habit tracker:

This 16-year-old has her own shop selling planner pages and stickers and they are SO CUTE:

These habit tracker graphs and cross-word style grid are everything:

Last but not least, these ADORABLE stickers for tracking your periods.

NEW IN THE SHOP: period tracker stickers! They are available now 😊

A photo posted by StickersGonnaStick (@stickersgonnastick) on Nov 24, 2016 at 2:22am PST

I've also got a Pinterest board full of Bullet Journal inspiration!

It's so inspiring to see other people's arty ways of organising their lives. Sure, bullet journalling is a bit of a frivolous, fashionable trend, but it's harmless fun that keeps us motivated to organise our lives around what's meaningful to us. Long live the bullet journal! 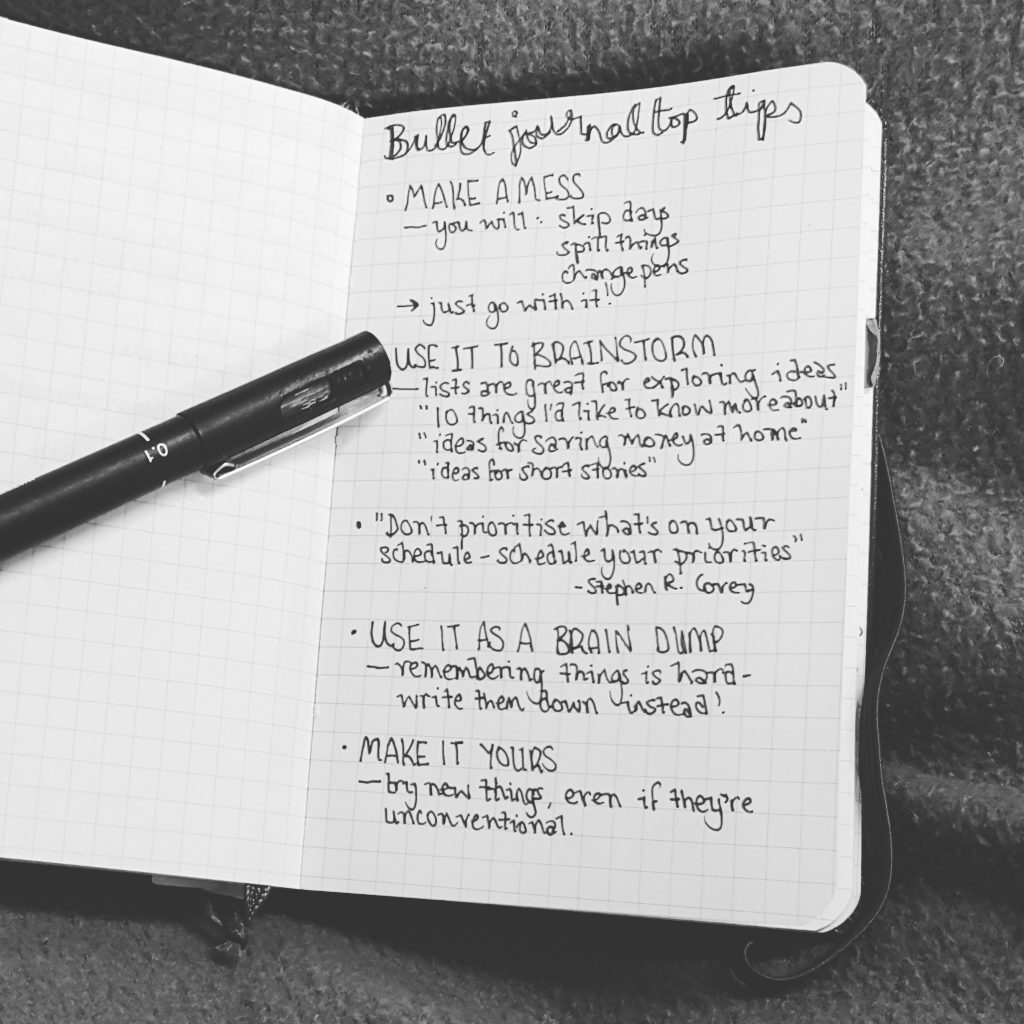 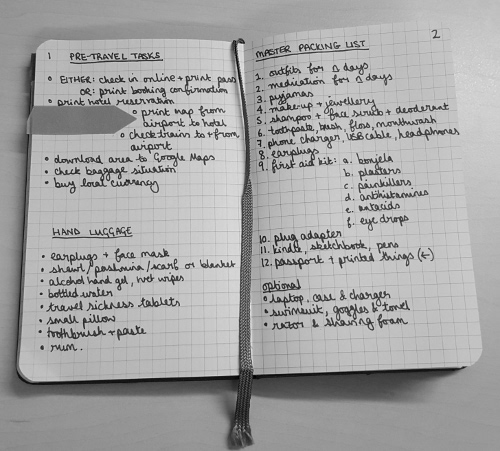 4. Important components for a daily routine
5. Questions about the world
6. Things to draw
7. Money-making ideas
8. Money-saving ideas
9. Skills I want to learn
10. Books I've loved
11. Books to read
12. Craft supplies that I own
13. Ideas for stories
14. Favourite dinners, lunches, and snacks

15. Self care activities
16. 5-minute housework tasks
17. People who are jerks (this one is very satisfying to fill in after a hard day)
18. Nice things to do for people who are not jerks
19. Things I'd like to buy but can't quite justify to myself.
20. Things I like about... (Autumn, Christmas, rainy days, my walk to work)
21. Distractions that are keeping me from concentrating on work
22. Goals for... (exercise, home, work, learning)
23. "Bucket lists", i.e. things to do before... (the end of summer, moving house, kicking the bucket)
24. My heroes
25. Gift wrapping ideas
26. Bullet journal ideas (habit trackers, logs, collections)
27. Ideas for blog posts and articles
28. Actions that will advance my career
29. Workout ideas
30. Projects to try (programming, sewing, knitting, makeup...)