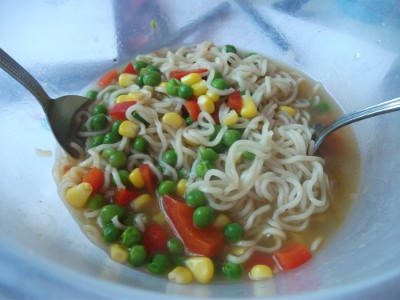 As a student, economy is very important in my meal plans. This is a dish I make quite often, that costs a whopping 46p per serving, provides one of your "five a day" and 6% of your protein RDA. Tesco's 11p noodles are one of my favourite things in the world - they're vegetarian if you throw away the flavouring packet, and they have a nice texture. You can substitute in any other brand of instant noodles - you just might have to adjust the cooking time and amount of water. This serves 1.

Method
1. Heat up the sesame oil in a saucepan, then add the onion and five spice powder, and fry for a minute or so.
2. Add the boiling water, stock cube, frozen vegetables, bell pepper (if using) and chilli flakes, and bring to the boil.
3. Add the noodles and cook for 2.5 minutes, stirring occasionally.

Serve with a spoon, fork and napkin. It's messy to eat!

... to the cinema. I feel like I've been anticipating the new Joss Whedon film, the Cabin in the Woods, for a million years. I finally watched it today, and was not at all disappointed. It was hilarious, clever and full of unexpected twists and turns. It has a few familiar faces from his previous projects, most notably Fran Kranz (Topher from Dollhouse) as the quipping, pop culture-referencing stoner Marty, and my old favourite Amy Acker (Fred from Angel) makes an appearance as a serious-faced chemist. Not that they're typecast at all. There are also echoes of the Rossum corporation, and the Initiative. I don't want to give away the plot, but the film is a fantastic deconstruction of the horror genre, that asks some deeper questions about why society needs to see people being pulled to shreds by monsters in our movies - in between lots of people being pulled to shreds by monsters.

The Hunger Games and A Dangerous Method are also definitely worth a watch, for cool sci fi and angry Freud, respectively.

...watching food programs. Hugh Fearnley-Whittingstall's River Cottage Veg is showing again on More4 on Sundays at the moment. I love all the River Cottage series anyway, since I'm a huge foodie, but as a vegetarian, watching a food show where I can cook everything on the menu is a particular treat. I have the cookbook that goes with the series as well, and I've really enjoyed cooking and eating the recipes I've tried, especially the macaroni peas and the spicy carrot and chickpea pita pocket.

The Fabulous Baker Brothers is another food-focussed show I've been enjoying, as well as my old favourite, Jamie's 30 Minute Meals. Edit: I forgot How to Cook Like Heston! How could I? It's wonderful and mad.

...using PyX to make graphs. It's a really useful Python module that makes both graphs and pictures. You put in your data and out comes a PDF or a postscript file. It's super easy to change colours, line styles and axes - and because it's Python, it fits in well with the simulation that I'm making in the same language. I found the documentation and examples on the website really useful and easy to understand.

...reading some Red Dwarf books. Red Dwarf: Infinity Welcomes Careful Drivers and Better than Life are two old favourites of mine. While the TV series was a bit hit-and-miss in places, the books are very funny and very polished - they employ the same kind of anarchic, surreal comedy as Douglas Adams, with more curry and fewer dressing gowns.

...doing some other things. Apart from all of that, I've mostly been huddling inside in the warm and dry while torrential rain thunders outside, revising for my upcoming exams, and turning up at my partner, John's, house to demand food (successfully: I am working my way through a slice of freshly-based soda bread as we speak). Stay dry, folks. 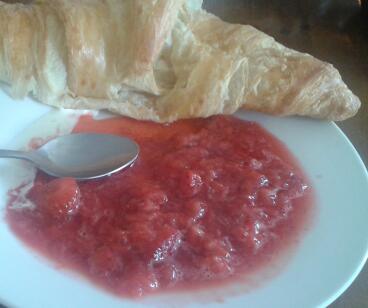 Every year, pre-season strawberries pull me in with their lovely red flesh and wonderful smell, and then when I inevitably buy and eat them, they taste like vinegar and sadness. It seems like sacrilege to waste them, though, so until I learn self-control, I'll be making a lot of compotes. This is the one I made today. It pretty much tasted like very fancy, slightly warm jam.

Strawberry compote for the terminally impatient
Serves 2 or 3

Directions:
Slice the strawberries.
Put all the ingredients in a saucepan over a low heat and cook until the strawberries are soft - around 5 minutes
Mash with a fork
Serve with anything you like. I went for a croissant and a spoonful of double cream because apparently my resolution this year is to become fat like a house.