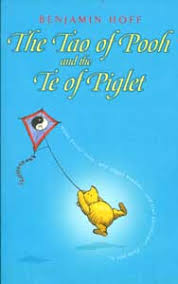 ...reading The Tao of Pooh and the Te of Piglet by Benjamin Hoff. I thought it might be a pretty interesting read - what better way to learn about a religion than through irreverent Winnie the Pooh quotes? Well, I've been enjoying the quotes immensely, but so far the book itself hasn't impressed me in the slightest. It's full of snide remarks about "dessicated scientists" and basically makes the point that you can't understand the natural world unless you completely avoid studying it in depth. The idea that further knowledge about a thing makes it less beautiful is truly abhorrent to me as a scientist... and as a human being.

...not so much reading as flipping through Cooking For Geeks by Jeff Potter - which, in contrast, is a wonderful book that completely demystifies all of the processes that we use in the kitchen.

...listening to podcasts of Marcus du Sautoy's Radio 4 series, A Brief History of Mathematics. He very approachably describes the key ideas in the history of maths, and the people who came up with them (or discovered them, I suppose, depending on your viewpoint). They've come in handy while I've been...

...running the Couch to 5k Program for the last three months or so. I'm only at the end of Week 7 of the schedule (I've had to repeat a lot of days!) but I've ran further and longer than I ever have before, and I feel great!

...programming some bioinformatics applications in Python. One which converts an amino acid's pKa to the fraction which will be protonated at a range of pHs (source code), one which uses a whole protein sequence to find the pH at which it will have zero charge (source code) and, most recently, taking biological data from several databases and collating them into linked HTML pages (source code and essential module). The programming lessons section of my degree has been fantastic, I'm quite sad that it's nearly over.

...knitting Christmas decorations for my house and making some homemade Christmas presents. But let's not spoil the surprise :)