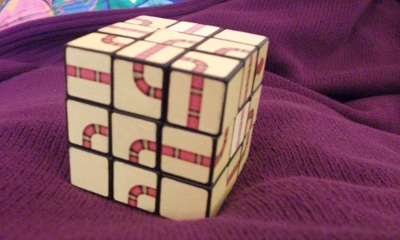 I haven't made any cool crafts or programs to show off on my blog in a while, so I thought I'd make a post about things that I'm up to, and things that are coming up this year. In short: Oxford, science, business plans, science, running, science and rubik's cubes. Read on if this intrigues you.

In October this year - provided that I pass my Master's degree - I'll be starting on a PhD programme at the Systems Biology Doctoral Training Centre in Oxford, as a member of Somerville College. The first year of the programme is a series of taught modules, covering every aspect of systems biology, from statistical data analysis to biophysics to pharmacology. I'll then do two short (12-week) lab projects before beginning the PhD proper, three years of research with a group at the university. I don't have to choose what any of these projects will be yet, which gives me some much-needed time to decide on my career path.

I've wanted to do this PhD programme ever since I found out it existed this summer, so on being invited to an interview in December, naturally I screamed like a little girl. The interview consisted of a conversation with two of the course's professors, who asked me some questions about biology (such as, "how do we know that X-ray crystal structures are accurate?" and "what is a gene?"), asked me about my motivation for joining the course and career plans, then gave me a differential equation to solve. Somehow, despite making a very basic maths error during my calculations and forgetting how to draw graphs, I had an email a few weeks later offering me an EPSRC-funded place!

I'm so excited, and I can't wait to start. Of course I'm going to miss Sheffield, and I'll probably be trekking back up here all the time when I leave, but I love Oxford, and it'll be great to move closer to my family and friends down south. Also, there is an amazing falafel stall near the science area that I'm very keen to get back to.

I have a few concerts coming up, which I highly recommend attending. The Sheffield University Wind Orchestra (SUWO) will be joining forces with our counterparts from Manchester in a concert on Sunday 25th March. We've been sounding spectacular in rehearsals and we're playing some really fun pieces this semester, including some by Peter Meechan and our very own occasional conductor George Morton. As a non-music student, I'm really proud to play the flute in a university ensemble that performs to such a high standard. We're also going on tour this June to Maastricht in Holland, which should be super exciting! There's even more information on the newly-revamped SUWO website.

Also in March, the Sheffield University Chamber Choir have a concert on Tuesday 20th. We're singing some Kodaly, some Poulenc and some Gorecki, as well as a great modern piece by one of the music students. I've recently switched back to singing alto after being a soprano for several years, and I'm really enjoying the challenge! More information.

For my lab project this year I'm going to be making a computer model of the forces generated by a structural protein (actin) when a brewer's yeast cell takes in objects from its environment by engulfing them. This process is known as endocytosis, and it's used by yeast to recycle proteins from the cell surface, and to take in nutrients. Currently I'm writing a review of the scientific literature about the topic, and comparing models that other scientists have made. I'm itching to get programming, though, so I have been doing bits and pieces of the model when I can.

For one of my other modules I'm working as part of a group to come up with an agent-based model of bacterial colony growth and competition, using a proprietary (non-free) program called Matlab. This is going to be a very modelling-heavy semester for me! We're still in the planning stages at the moment, but when we are finished we should be able to create some great visualisations of the data. Working with students from engineering and computer science backgrounds is a new experience for me, but I love having the chance to see how they program.

Some of my other group projects are a little more speculative. In one module we're going to design a bionanomaterial for use in healthcare, and in another we're creating a business plan and financial forecasts for an imaginary biotechnology company. The idea my group has started developing for our company is to perform personalised genome analysis for people to look for genes involved in weight gain and exercise response, and create tailored diet and exercise plans accordingly. It was inspired by last week's Horizon episode about exercise response.

Alongside that, I'm coming up with a different company idea for the university Enterprise Zone's business planning competition. I thought I might as well take advantage of the enterprise-focussed resources and workshops available here in Sheffield while I can. I have no immediate plans to start a business, but the skills I learn might come in handy later on in my career.

This July, I'm going to be running the Cancer Research Race for Life 5K in Sheffield. I'm hoping that I can run or jog the whole way without any walking breaks, but I'll have to see how my training goes! I've been working on Couch to 5K since the summer, but at my speed it's been more like Couch to 2K so far! If you would consider sponsoring me, I would be very grateful indeed.

At the Bitfixit Café this weekend, I tried (and failed) to install Windows XP on a laptop from a USB stick using FreeDOS. More on this if I ever succeed.

The picture at the top of this post is of a toy I picked up in a charity shop a while ago. It's a rubik's cube, with an anaconda puzzle on the squares. Now, I don't know what sadist came up with this particular puzzle but I'm fairly sure it's practically impossible to solve. So I'm writing a python program to find a solution by going through every configuration until one works. After that I think it should be easy enough to solve using standard rubik's cube algorithms. We'll see.