If you mess around with the ion currents in and out of a heart cell enough, you can perturb things so badly that you cause the cell membrane to depolarise again prematurely. These "afterdepolarisations" happen all the time in vivo, and aren't usually a big deal; unless a lot of cells do it all together, the effect is too diluted to cause an arrhythmia. However, if enough cells do it together, or if you combine afterdepolarisations with other heart problems, they can cause someone to drop down dead instantly. 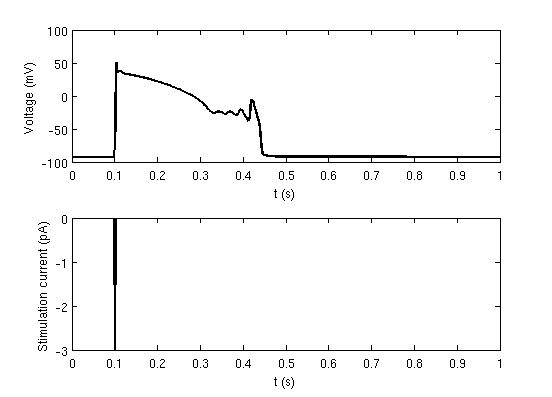 The EAD begins at around 0.3 seconds.

Or it can happen after the cell has repolarised - a "delayed afterdepolarisation". This is always accompanied by calcium release from the sarcoplasmic reticulum. 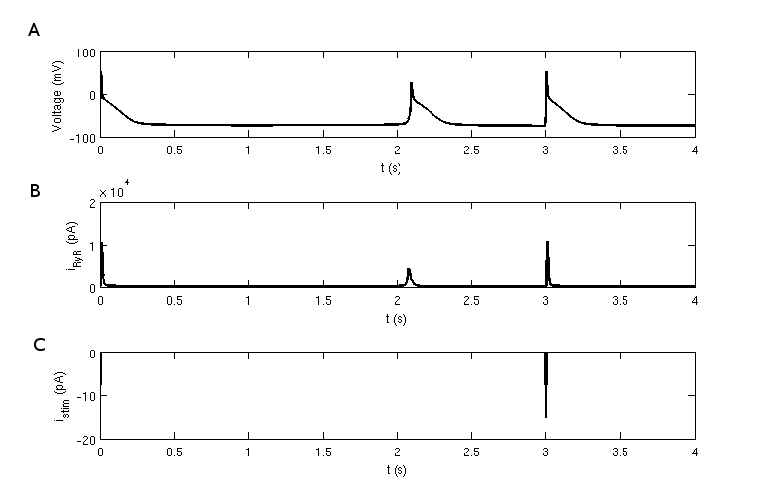 The DAD begins at around 2 seconds. The sarcoplasmic reticulum calcium release current is labelled as

Drugs that make either type of afterdepolarisation more likely could make arrhythmias more likely. For my project this summer I'm writing some code to combine information from drug tests on single ion channels with heart models to predict EADs and DADs. The hope is that this software could better predict cardiac side-effects from new drugs, and maybe even replace some tests that are currently done on animal tissue.

This week, I wrote a review of the literature around this topic, as well as a MATLAB program to take data from single cell models and detect afterdepolarisations. If you like, you can download the AD detection program, as well as my report and the LaTeX file that made it.