It's quite useful to be able to clamp the membrane voltage of a cell you're simulating to a particular value. I have found myself wanting to clamp the voltage to a series of values, or even a whole voltage trace from another simulation. There isn't an easy way to do this in Chaste (yet - if I have time I'd like to make it into an easy function), so I'm sharing the bit of code I wrote to make it happen.

If you've not run single-cell cardiac models in Chaste before, look at this tutorial, and if you need to install Chaste on a Debian machine, try this.

First, include ALL THE THINGS:
END_OF_DOCUMENT_TOKEN_TO_BE_REPLACED

So this fortnight at the doctoral training centre, we've been from "Hello World" to image processing in C and Perl. Yeah.

Anyway, before my brain explodes from over-knowledge-ness, I thought I'd blog about the program I made! It's a cellular automaton (like Conway's Game of Life) that essentially represents lots of bacteria immobilised on a silicon chip. I based it on this paper from 2004. In my simulation, the cells grow, divide and die based on how much food they are getting from the environment.

The bacteria contain a special gene from fireflies called luciferase, which allows them to bioluminesce. Halfway through the simulation, the cells are bathed in a solution that causes DNA damage. This activates the luciferase gene. The idea behind the original experiment was to use bacteria to sense when a molecule causes DNA damage, in order to screen for molecules that might cause cancer. 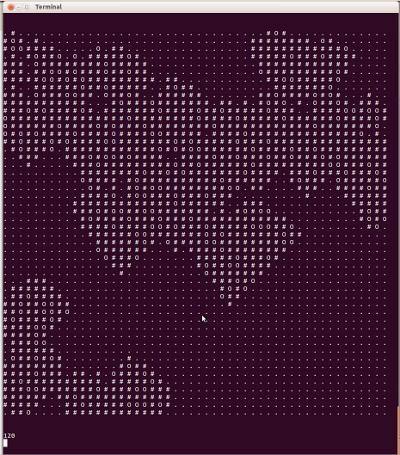 The simulation outputs a rudimentary display to the terminal. The glowing bacteria are represented by the letter "O" and the wild-type bacteria are shown by the "#" symbol.

If you want to read more about the biological background and the implementation, you can read my report, or try compiling and running my C code.

This was a really good opportunity to test out all the things I learned about C this week! In addition, the write-up I handed in was written in LaTeX, which I am completely new to. I've uploaded my Tex files (report.tex and code.tex) and the bibliography file (cellularautomata.bib, which was created by Mendeley) if you want to have a look at them - it turns out that the trick with LaTeX is just to have a template file to build on.

I found a useful bit of LaTeX code to stitch two PDFs together (which you can download as a file):

Pretty cool, huh? I've put all the LaTeX bits together in a .tar.gz file here. To extract and compile, run these commands in sequence:

As I mentioned in my previous post about my adventures in FLAME modelling, I started out with code from my lecturer. I started with three two-dimensional models, each of which contained a different type (genus) of bacteria (Vibrio, Sar11 and "Bacteria X"). Each bacteria agent had X and Y co-ordinates, an ID and a radius. The radius was different for each type of bacteria, and it defined the rules that applied to that bacteria. They moved around by Brownian motion, and if they hit a virus there was a certain probability that they would be killed. The phages moved around in a similar fashion.

My code can be downloaded from here. In this post, I'm going to take you through how I converted these three models into a single model, added a third dimension, and persuaded the viruses and bacteria to replicate. This is a tale of how it's possible to do some quite cool things to a program even if you don't fully understand how it works.

If you're particularly interested, you can download a PDF of the report I handed in here. It starts with a brief review of a mathematical bacteriophage model, then goes on to the FLAME model in the second half (page 2). I got a mark of 95% for it, so I'm showing it off to everyone ^_^